Socotra Island, Yemen. One of the most alien looking places on earth.

The Socotra Archipelago lies 380 km to the south of Ras Fartak on the Arabian Sea coast of Yemen. It includes a group of islands – Socotra, Darsa, Samha and Abd Al Kuri. The western-most point of the Archipelago is just 80 km east of Cape Guardafui on the Somalia Peninsula.

With a total land area of 3625 m2, Socotra is the largest of four islands. The eastern and central parts of the island are dominated by high mountain ranges with 1,570 m peaks and valleys providing green refreshing oases, sometimes hidden.

Long ago the Socotra Islands were a part of Africa and Arabia, now separated by the Gulf of Aden. Its long isolation period lasted for at least 20 million years favored evolution and origination of new species.

The Islands are a home to a great number of endemic species. All the land mollusks, 90% of the reptiles and a third of the plants can be only met in this area. Its population of endemic bird species is the biggest on the Middle East.

Owing to location at the northwest part of the Indian Ocean, east of the entrance to the Red Sea, the Islands are inhabited by exceptionally great variety of fish, corals and other invertebrates carried here by major ocean currents from nearby and far away seas.

The Socotra Archipelago boasts a rich flora, remarkable endemic species and plants with a long history of traditional use. With a total of 835 vascular plant species, 308 (37%) are endemic. There are also 74 bryophytes; one hornwort, 30 liverworts and 43 mosses, 6of which are endemic (Kürschner, 2003).

The islands have a diverse geology and a climate that varies between areas, creating a diversity of ecosystems. Dense evergreen and semi-evergreen woodland can be found in wet and sheltered areas, but there are also drought-adapted plants surviving in desert-like landscapes.

Because of such high diversity and endemism in plants, the islands have been declared a WWF Global 200 Ecoregion, a Plantlife International Centre of Plant Diversity and are included in the Horn of Africa Biodiversity Hotspot. These are added to designations of UNESCO World Heritage Site and UNESCO Man and Biosphere Reserve.

There are many endemic species that are famous and remarkable, both to botanists and keen amateurs alike. The dragon’s blood tree,
Dracaena cinnabari (Ruscaceae), is named after the blood-red sap that exudes from the trunk when cut. This has been used traditionally as a medicine and a cosmetic. The trees are slow-growing and long-lived (possibly a few hundred years), and in maturity the crowns have an upside-down umbrella shape. The dense Dracaena woodland found at Firmihin is globally unique – no other arborescent (tree-forming) Dracaena species are found in woodland as they are on Socotra.

The desert rose Adenium obesum subsp. sokotranum (Apocynaceae)is one of the most famous of the Socotran bottle-trees; trees that store water within their trunks to help them survive the more arid environments of Socotra. The Socotran subspecies can grow much larger than the mainland subspecies, reaching 5 m in height, with huge, swollen trunks that give them their name, obesum (obese). Desert roses are scattered throughout Socotra, but are perhaps best observed on the limestone plateau of Dixsam where they can dominate the landscape. Often at least one individual can be seen flowering; when many flower, it is said to predict the coming of the rains.

Dorstenia gigas of the fig family Moraceae is another famous endemic Socotran bottle tree. Again, it is much larger than other species of Dorstenia, reflected in its species name ‘gigas’ meaning ‘giant’. These trees can be found scattered across Socotra, where they can be seen almost magically growing from cliffs and rock-faces.

Dendrosicyos socotranus is one of the largest trees in Socotra. It is the only tree-forming species of the cucumber or gourd family, Curcurbitaceae, sometimes reaching above 6 m in height. They are found throughout the lowland, drier areas.  Native to Socotra, a small island off the “horn” of Africa, Dendrosicyos socotrana is a truly unusual and in cultivation, an extremely rare plant 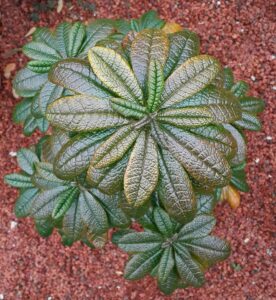